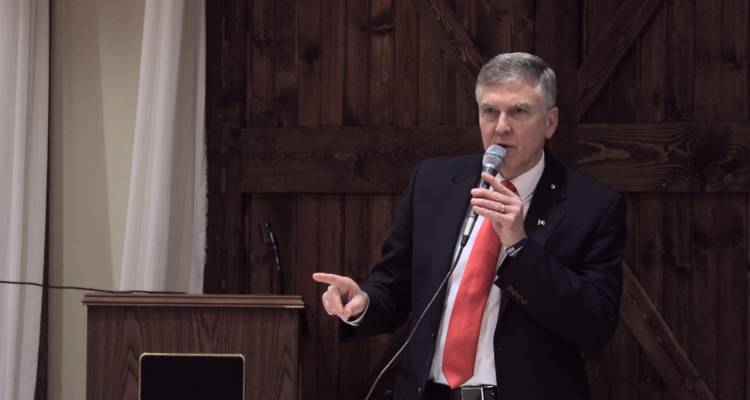 Congressional candidate Jim Marter was the obvious winner in a well attended debate that took place in Yorkville, Illinois on Wednesday evening. Organized by the Stamp Act Pac, Jim participated along with two opponents. A third opponent, declined the invitation and later scheduled a fundraiser instead.

“I think Marter won by every measurement. He had the most applause lines and knew the most about the issues,” said one attendee. Another, in his early twenties, said that Marter was the only one citing accomplishments on the issues, rather than just talking points.

The first question pretty much set the mold for how the rest of the questions went. Only Jim Marter had a record he could point to and the crowd was responding to that very well.

They were first asked about their willingness to stand up party leadership and who in Congress they most aligned with. Jim was able to point out that he was the only person in the race who has already stood up, unintimidated by big fights or powerful party leaders. Marter opposed former Senator turned China Lobbyist, Mark Kirk and Russia Hoaxer, Adam Kinzinger. Marter may have been the only elected county chairman to call out Governor Rauner and when the local “Kendall County Swamp” started giving away hard earned tax dollars, it was Jim Marter who built a grassroots team and swept all 4 seats in his hometown of Oswego. He now chairs the Kendall County GOP and serves as a Deputy for IL-14 on the GOP State Central Committee.

Jim’s answer to the second part of the question earned as much applause as the first, pointing to his endorsement from House Freedom Caucus Congresswoman, Mary Miller of Illinois and his personal meetings with Congressman Jim Jordan. Others who Marter said he admired were Rand Paul, Warren Davidson and Ted Cruz. Marter’s opponents tried to paint similar pictures but could not cite any real examples.

Throughout the night, Marter displayed a command of the issues and the ability to connect with people at a kitchen-table level. He discussed his specific plans for reversing higher food and gas prices, protecting our rights and freedoms, holding big tech, big pharma and big media accountable and securing our border and our elections.

“I’m not just in this to win an election. I have the knowledge, experience and core values to do the job successfully and represent our district well,” said Marter. “I was the only one on stage who lives in the district and I have well over 100 endorsements at the local, district, state and national level. I’m perfectly positioned to beat Lauren Underwood and it’s becoming increasing clear to the voters. My goal is to save America and the American Dream. I’m thankful to my two opponents who showed up tonight and I look forward to their support, after I win this Primary.”

The campaign would like to thank the Stamp Act Pac for organizing and excellent debate.