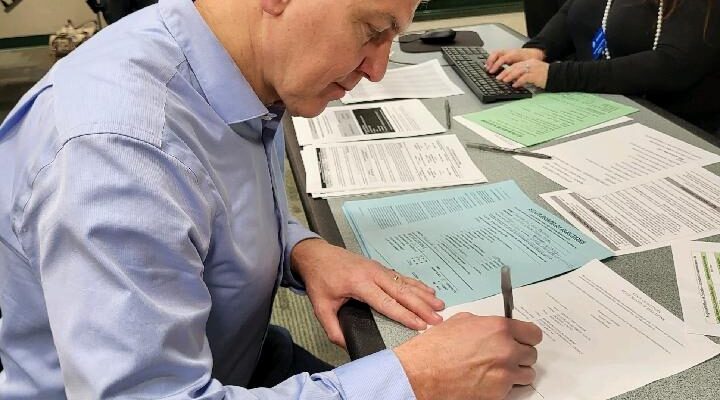 James Marter filed his petition package yesterday to be placed on the ballot as a candidate for Congress in Illinois’ 14th District.

“This marks another major step towards Jim’s replacing of Lauren Underwood and bringing representation back to the district,” a campaign spokesperson said.

Jim Marter has the most signatures, the best name recognition, the most endorsements and the strongest grassroots team behind him in this Primary. With his recent installment as the GOP’s State Central Committee Deputy for the 14th District and his role as the current, twice elected Chairman of the Kendall County GOP, he is the frontrunner for the nomination, setting the stage for Representative Underwood to have the biggest challenge of her political career, when she faces Jim Marter in the General Election.

Jim is an action-taker, a leader, a public servant, a hard worker and a freedom loving American. No one will out work him in this race, or in Washington, to bring fiscal sanity, common sense and America-First policies to the forefront. He’s running because he wants to continue serving his community and his country. As the Primary approaches, it’s becoming increasingly clear that the people in the district are rallying behind him. They, like Jim, believe they’re worth representing, even if Lauren Underwood disagrees.

Marter submitted his signature package in Springfield early in the morning on Monday and said he was humbled by the 40+ volunteers who circulated them for him, securing over 1,200 signatures from all seven counties within the district. The 14th District is home to Marter, his wife Jill, three of his four children’s families and his grandchildren.

“This is where I live and have served for over 25 years, as a coach in youth sports programs, as a Scout leader, in my church, civic organizations and in government,” explained Marter. “I plan to continue my commitment to life, liberty and the pursuit of happiness, protecting our God-given rights and working to make us a more prosperous and free nation for generations to come.”