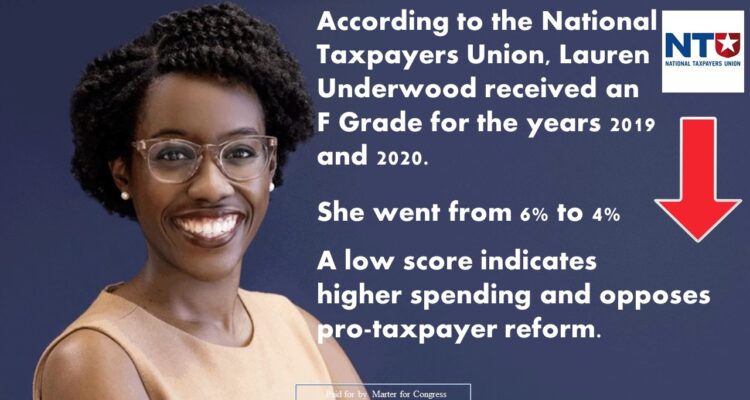 Today, James Marter, running for Congress in Illinois’ 14th Congressional District, highlighted his opponent’s record on taxes and spending. While a spokesperson for Taxpayers United of America confirmed they will be officially endorsing James Marter, his opponent Lauren Underwood is not endorsed. In fact, Underwood has received an F Grade from the National Taxpayers Union, every year she has been in office.

“She is no friend to the hard working taxpayers of Illinois,” Marter said. “She has no intention of ending her tax and spend spree and this is particularly obvious with her recent votes. Her record is getting worse not better, even though her score is already the lowest it can be. Her F rating doesn’t hurt her, it hurts us, the people she swore to represent. It hurts our nation and hurts future generations of children growing up in America. We need to retire Underwood now and that’s what my campaign is about. I will protect the people’s hard earned dollars.”

Marter has a solid record of opposing the tax and spend policies that have resulted in out of control government debt. Marter announced the renewing of his promise to be relentless at reducing the size and scope of the federal government and attacking the waste, fraud and abuse that enriches politicians at our expense.

Illinois deserves better and with James Marter, we’ll have a Representative who will fight for tax reform and the hard working taxpayers he’s accountable to.