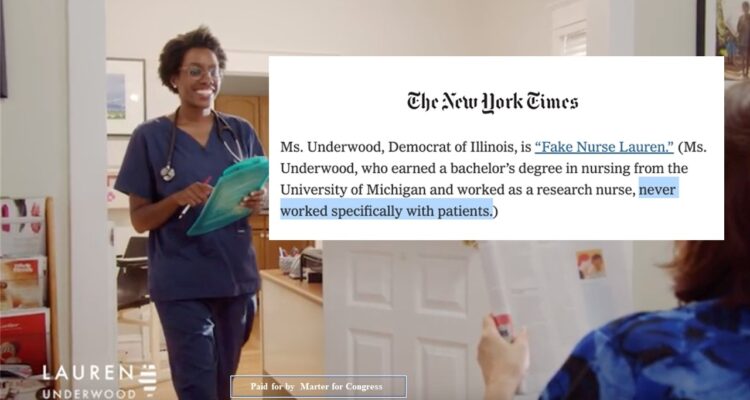 U.S. Congressional Candidate James Marter called on Lauren Underwood  to apologize to the Nursing Community and her constituents for deceiving them and endangering their lives.

During her first run for Congress, Underwood boasted of her experience in Health and Human Services, preparing for and responding to public health crises. Similarly, she touted her nursing career, although the New York Times has since exposed that she had “never really worked with patients.”

“Much of the Congresswoman’s rhetoric appears to be geared to gaining political office, rather than sharing truth. Her actions don’t match reality, nor do they serve constituents or represent them,” says James Marter, running to unseat her in the House.

“The reality is, she was critical of the prior administration when supplies of PPE were low, even though she was a senior advisor with HHS, whose role is preparedness and response during public health crises. Tweeting about how unacceptable the shortage was, while being a senior official in charge of it, really shows a lack of character. The H1N1 pandemic greatly reduced the national strategic stockpile of N95 masks by 75% and as the Washington Examiner has reported, it was Lauren Underwood and her team who failed to replenish it, during her time in the Obama Administration.”

“This shows carelessness and dishonesty. It’s a continuing pattern of projecting blame on to political opponents instead of taking responsibility. We see more and more of it from Underwood and others within her party. We need more honest, public servants, not say-anything politicians. I’ve been serving my community all my adult life, much longer than I’ve been a politician,” reminds Marter. “We need a Representative who will stand with our frontliners and not lie to them or us.”